Bring you a taste of American Wedding 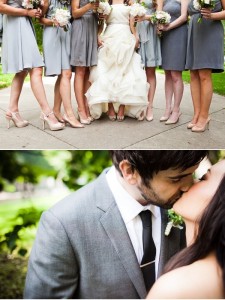 " I do." To Americans those two words carry great meaning. They can even change your life. Especially if you say them at your own wedding. Making wedding vows is like signing a contract. Now Americans don’t really think marriage is a business deal. But marriage is serious business.

It all begins with engagement. Traditionally, a young man asks the father of his sweetheart for permission to marry her. If the father agrees, the man later proposes to her. Often he tries to surprise her by "popping the question" in a romantic way.

Sometimes the couple just decides together that the time is right to get married. The man usually gives his fiancee a diamond ring as a symbol of their engagement. They may be engaged for weeks, months or even years. As the big day approaches, bridal showers and bachelor’s parties provide many useful gifts. Today many couples also receive counseling during engagement. This prepares them for the challenges of married life.

At last it’s time for the wedding. Although most weddings follow long-held traditions, there’s still room for American individualism. For example, the usual place for a wedding is in a church. But some people get married outdoors in a scenic spot. A few even have the ceremony while skydiving or riding on horseback! The couple may invite hundreds of people or just a few close friends. They choose their own style of colors, decorations and music during the ceremony. But some things rarely change. The bride usually wears a beautiful, long white wedding dress. She traditionally wears "something old, something new, something borrowed and something blue." The groom wears a formal suit or tuxedo. Several close friends participate in the ceremony as attendants, including the best man and the maid of honor.

As the ceremony begins, the groom and his attendants stand with the minister, facing the audience. Music signals the entrance of the bride’s attendants, followed by the beautiful bride. Nervously, the young couple repeats their vows. Traditionally, they promise to love each other "for better for worse, for richer, for poorer, in sickness and in health." But sometimes the couple has composed their own vows. They give each other a gold ring to symbolize their marriage commitment. Finally the minister announces the big moment:&nbsp;"I now pronounce you man and wife. You may kiss your bride!"

At the wedding reception, the bride and groom greet their guests. Then they cut the wedding cake and feed each other a bite. Guests mingle while enjoying cake, punch and other treats. Later the bride throws her bouquet of flowers to a group of single girls. Tradition says that the one who catches the bouquet will be the next to marry. During the reception, playful friends "decorate" the couple’s car with tissue paper, tin cans and a "Just Married" sign. When the reception is over, the newlyweds run to their "decorated" car and speed off. Many couples take a honeymoon, a one- to two-week vacation trip, to celebrate their new marriage.

Almost every culture has rituals to signal a change in one’s life. Marriage is one of the most basic life changes for people of all cultures. So it’s no surprise to find many traditions about getting married ... even in America. Yet each couple follows the traditions in a way that is uniquely their own.

After reading this article' are you ready to find your other half? Start from here www.date-a-millionaire.com

People Also Read: How To Start A Talk With Millionaires?